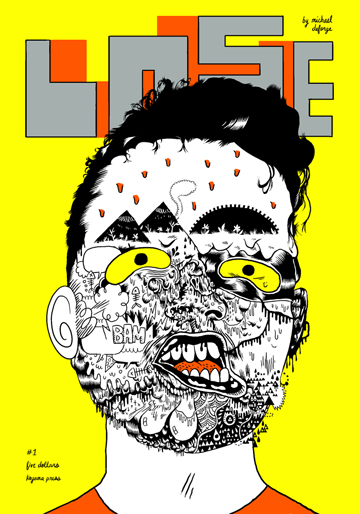 24 pages of illustrated goodness for only $5 (CAN) + shipping/handling

Toronto artist Michael DeForge (whose illustrations will grace the cover of our upcoming CAROUSEL #25 — Spring-Summer 2010 issue) has a new publication out now! Lose, DeForge’s first full length comic, is a comedy about Nesbit Lemon’s trip to hell, and all the familiar faces he meets there. It’s a 24 page saddle-stitch comic book, and was recently released by the wonderful Koyama Press

Michael DeForge was born in 1987 and works as a cartoonist and commercial illustrator. Past clients include The Believer, Vice, New York Times Magazine and The Walrus. In 2008 he was nominated for a National Magazine Award in the category of “Best Illustration” for work printed in Ottawa Magazine. He has collaborated with the printmaking group Bongout on the silkscreened book Hand Astronaut and recently participated in the group show “Neighbourhood Sacrifice” at the DeLeon White Gallery with Jesjit Gill and Steph Davidson. Among his influences are Jack Kirby, Mark Newgarden, Saul Steinberg and Eduardo Munoz Bachs.