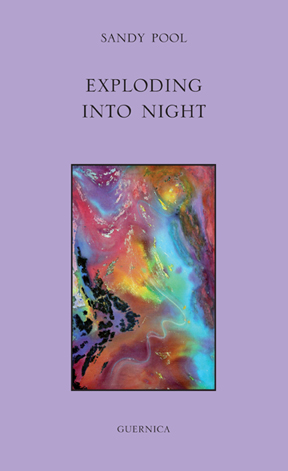 Toronto-based writer and artist Sandy Pool (whose work will appear in the forthcoming CAROUSEL #25 — Spring-Summer 2010 issue) has just released a new book of poetry, Exploding into Night. This collection is an initiative of Guernica Editions‘ First Poets Series, which focuses on previously unpublished writers under the age of thirty-five; other First Poets Series authors include past CAROUSEL contributors Clara Blackwood, Desi Di Nardo and Jim Johnstone.

“In Exploding into Night, Sandy Pool delves into the heart of a grisly murder that took place in the Parkdale area of Toronto. With its dazzling turns and deafening silence, this narrative poem is a stark reappraisal of urban existence and its heartache. Pool’s metaphysical landscape speaks in multiple voices and prods the very nature of our collective conscience”. A selection of poems from this collection was awarded First Place in the 2009 Elora Writers’ Festival Poetry Contest.

>>> The Toronto launch of Exploding into Night (along with several other new Guernica titles) occurs Sun Dec 6, 2009 (2–4 pm) @ Bar Italia (582 College St); you can read more about it at the Facebook Event Page: here